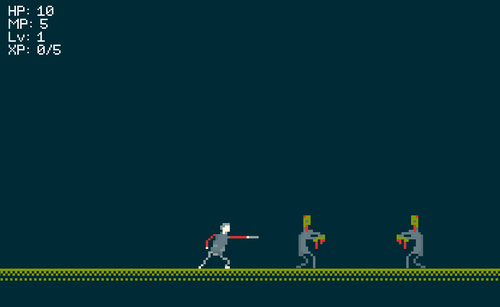 Attacking is a big part of the game, but I needed to prevent the player from moving or jumping while you're attacking. I ended up putting in a function, "is attacking", and a bunch of hacks to disable everything. Cool. Moving on, to the crouch jump...

I was watching some youtube videos, when I came across a comment someone made on the old NES Batman game. In it, before he jumps, he briefly ducks. I liked the idea, as it makes jumping feel like it has more weight, plus it makes it more of a tactical decision. This makes the jump have a delay, you're committing to it, but you rise VERY quickly, and fall a bit slower. I like the game feel of it, and I want to continue to embrace mechanics that force you to think more tactically, rather than run-and-spam attack. It's a reason I like the modern Castlevania games.

I couldn't easily hack in another animation-waiting event... and the code was looking pretty complex. So I refactored, and I sort of discovered a new pattern on Godot that I've quickly fallen in love with. It's a pretty common state machine pattern I've practiced outside of Godot, so it's nothing revolutionary, I just like how it was implemented in Godot. 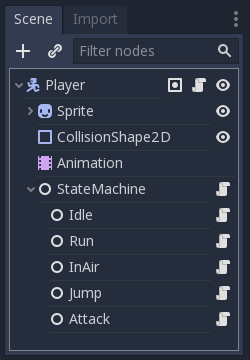 He's the player object. He's a kinematic body, he has a sprite, he has some animations... but what I want to focus on is the "StateMachine" node. This is the core of the pattern. The StateMachine manages the current state, and each child node is a different state with its own logic. Let's take a look at the StateMachine code:

Now, the first line of code in process is to update the current state. We ask the current state, "should we transition to a new state", by calling get_next_state. The function will decide if we should transition to a new state. If so, it returns the name of the new state, otherwise, it returns null. We then invoke an "on_enter" function if we do change state (this was needed to trigger one-off things that should happen immediately upon entering a state. If you want to trigger something when leaving a node, you could call the "on_exit" before updating the current_state.)

Lastly, we call update in the node... that's about it!

Let's look at an example of a state to recap. Here is the code for the Attack state:

When you first enter the state, we need to trigger the "Attack-Knife" animation, which plays an animation, but also enables the appropriate hit-boxes to do damage. We then zero out the velocity. This prevents the player from sliding once they initiate an attack.

Then, when getting the next state, we need to see if the current animation is still playing. If it's done, then we go back to the idle state, otherwise, we call the base class (which just returns null).

If we had played the animation in the update, it was perpetually play the animation forever. This is why we need to do it just once.

I plan on using this pattern going forward. In the past, I've had implicit state machines, with many variables tracking them... it gets complex quickly. If I can make my state machine object more generic, then maybe I'll even export it as an asset that can be re-used between projects! If not... well... it's not a lot of code anyways.

Relevant source code for this tutorial can be found here:

Get Zombies Ate My Teacher