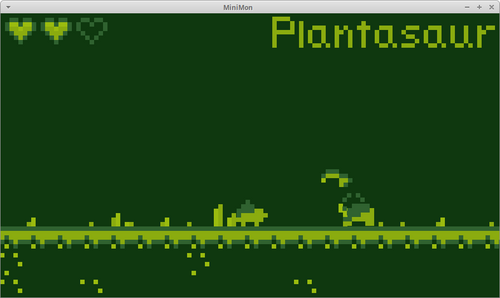 I've updated the game in a pretty small way. I've heard from a couple people that it wasn't obvious how to fight the Rhinodons. They would spam the attack button, and eventually kill them, but not before taking damage.

I hate when games hide information from you. I think this wasn't a failure on his part, it's his fault for him not making the correlation, it's my fault for not letting him make that realization.

To elaborate, I made Rhinodons always die in one hit for a reason, so that it was clear what the strategy is. However, when my friend Jared played the game, he never thought to hit them from behind. He thought, maybe they have a random amount of health, and if he just hit the attack button fast enough, EVENTUALLY he would win.

All this is to say, I made the projectile actually bounce off his horn, instead of just disappearing and making a noise. I hope this visual feedback doesn't effect gameplay, but rather conveys my intent more clearly. Don't worry, the recoil'd shot won't hurt you, even if you try to get hit by it (trust me, I was able to do it, no damage).

On top of that, I added a stationary Rhinodon facing away from you as the first enemy, giving you a chance to discover that his back is the weakness, in case you were just always spamming and never got a shot.

But that meant moving the level geometry a bit... and... I created a pretty cool looking semi-cave. It's super minor, but if I had more time on this game, I can totally imagine a few more high-quality levels.

Gotta capture them all!