All Music is Public Domain (see source code for details), so feel free to make youtube videos or stream without worry.

Found this gem while looking for the old flash game Night Rider Turbo, is there any chance that you were inspired by it?

The radio is kinda counterintuitive, it looks much more elaborate than it actually is and I didn't really understand what it did until night 2. maybe some sort of glow around the radio could indicate that it is just a single button.

I like the audio design, the sound of the door being unlocked is subtle but distinctive. There are similar environmental sounds that occasionally play, which makes listening for the unlock sound a nice challenge for the player.

Web build worked on my mobile but not on the pc for some reason, but it's totally fine.

For anyone having trouble with the controls:

Hold the steering wheel to automatically steer towards your lane.

Hold the radio to make yourself less sleepy.

Lock the door to your left to prevent it from dragging you out.

i dont know how but i suddenly was able to beat level 3 on my first try on a replay, wtf is with me?

level 1, you are an insomniac, the road is wide, and it is calm

level 2, you are a bit sleepy, the road is lean, and it is restless

level 3, you are narcoleptic, the road is thin as a tightrope, and it will stop at nothing to try and fuck you in the ass.

level 3 is just impossible for me, how do i handle this?

I don't understand how to keep yourself from closing your eyes.

- I understand that you need to keep the door locked to keep from getting dragged out (I only learned that from one of the comments).

- You also need to drag the steering wheel to steer yourself back onto the road, especially if you look away for too long from the road.

- I don't understand why the driver's eyes sometimes close faster at times compared to other times. Changing the radio station doesn't seem to do anything.

- You don't list the controls or how to do anything in the game. This can be nice to figure at sometimes, but not when you place the player in a situation where they have a time limit to figure it out before losing (plus, the fact that it takes like 7 seconds each time to reload the game is kind of annoying).

Tuning the radio wakes you up.

The theme from the jam was no text. That's why I couldn't explain anything. I agree with you though, a little bit of a hint would go a long way.

One more question concerning that; when the driver is in the process of falling asleep (the eyes start closing), I've tried messing with the radio, but it doesn't do anything (once the eyes start closing, they're going to close). Do I need to tune it to a specific frequency to keep the driver awake? By the way, thanks for the response. I appreciate it.

Just tuning it (keep the mouse held down) will open your eyes again over time. This is probably most apparent on night 1, where you honestly don't need to do much to pass.

I really liked the concept of this one. My only gripe would be that I couldn't quite get a handle on how the steering wheel operated. But I really enjoyed the fact that you had to maintain several different things at a time. To *really* get the sense of a long drive it might have been good to have luls in the action where the player just focuses on driving which might cause them to zone out. If you were inclined, you could take this much further with more radio options, progressively more variety and difficulty in tasks, and maybe even play with additional audio/visual cues that might go so far as to taunt the player at times. Perhaps even a story or setting. Good job!

You are being pulled out of the car to your left.

I noticed on slower PC's like my laptop, it happens WAY too fast and you can't tell what's happening.

If you look to your left, and lock the door, this will stop it from happening. But I don't think it likes that. 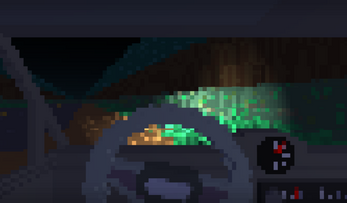 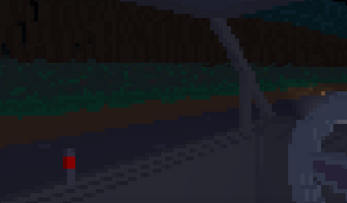 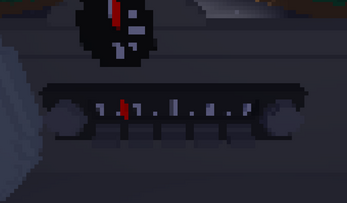